With over two inches of rain having fallen since early this morning, it seemed the perfect time to do some historical research about this spectacular area of the North Carolina mountains. By chance, I discovered a book written in 1859 called Mountain Scenery, by Henry E. Colton, a North Carolinian who wanted the splendor of the mountains revealed to the world. The Civil War was a few years away. Lake Lure would not be filled for almost seventy more years. Asheville was a very small town, but was the destination for a number of stage coach lines crossing the Blue Ridge Mountains. One of the most popular of those lines used a dirt road from Charlotte, and passed through Shelby and Rutherfordton before entering the valley of the Broad River. Following that clear stream, the teams entered the Hickory Nut Gap, formed hundreds of millions of years ago by earthquakes when the African plate was still part of the American continent. Today we know this area because of the popularity of Chimney Rock and Lake Lure, but in those days, the Gap was a total wilderness, with only one roadhouse near it’s entrance where the coaches would stop for the night before proceeding over the 3,000 foot Blue Ridge and into Asheville the next morning.

In one of the chapters, Colton describes his trip into Hickory Nut Gap in a way that writers today could only dream of. Images of mid-nineteenth century prints from the book will be displayed in proximity to photographs I have made since moving here. Remember, to enlarge the photos, just click on them.

Leaving Rutherfordton, the traveller begins to enter the mountains in reality. The road winds along the banks of Broad River, crossing it several times,–the river foaming and boiling over rocks and rapids all along the course.

Occasional glimpses are caught of the distant mountains, and every little while the road winds along the edge of a frightful precipice; but, for the most part, the road is not intensely striking until after we leave Mr. Harris’s. This gentleman lives about fifteen miles from Rutherfordton, just at what might be called the foot of the mountains; and the traveller, at his leisure, can find no better place to rest his weary limbs, or satiate an appetite acquired in the bracing mountain air. An excellent view of the mountains is obtained from this house. In fact, just here is the beginning of the grandest panorama of mountain scenery which is to be found easy of access anywhere in the West. The highest colorings of the imagination fail to picture a tithe of its sublimity, and the artist’s pencil would need the tenfold power of a Titian, or a Raphael, to make the canvas glow with an atom of its magnificence, or give the beholder a faint impression of the awe it inspires. 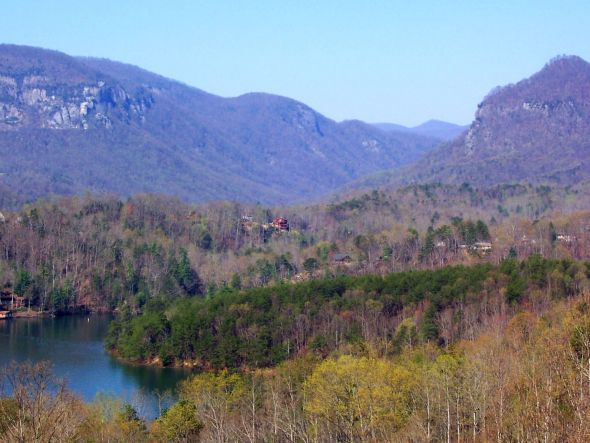 The road, for eight miles, winds upon the banks of the Broad River, the contortions of whose troubled waters are beyond description. They curvet and lash around each rock, as if caressing it, then scornfully, seemingly with coquettish glee, dash on, singing a wild song, as if murmuring at the barriers which nature has put in its course.

In the midst of this wild scene are the falls of Hickory-Nut Creek. This is a small stream, which rises on the top of the mountain, and, after a course of a mile or two, leaps over a precipice nine hundred and fifty feet in height. Its little tribute of waters is nearly all lost in spray, and but a small portion reaches the river. 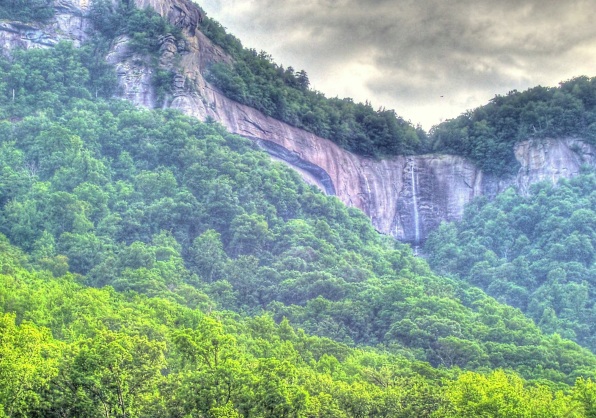 Below is an account of the same place, but this time it is given by a Mr. Lanman, who wrote a periodical called Allegany Mountains about the Appalachians much farther to the north. He had traveled to North Carolina and was astounded by the beauty he found.

My first expedition, on arriving at Asheville, was to a gorge in the Blue Ridge, called the Hickory-Nut Gap. How it came by that name I cannot imagine, since the forests in this particular region, so far as I could ascertain, are almost entirely destitute of the hickory tree. It is true that, for four miles, the gorge is watered by a brook called after the hickory-nut, but I take it that this name is a borrowed one. The entire length of the Gap is about nine miles, and the last five miles are watered by the Rocky Broad River. The upper part of this stream runs between the Blue Ridge proper and a spur of the Blue Ridge; and, at the point where it forces a passage through the spur, its bed-is exceedingly rocky; (Rocky Broad River, below)

and, on either hand, until it reaches the middle country of the State, it is protected by a series of mountain bluffs. That portion of  the gorge which might be called the gateway, is at the eastern extremity. From any point of view, this particular spot is remarkably imposing; the Gap being not more than half a mile wide, though appearing to narrow down to a few hundred yards. The highest bluff is on the south side, and though rising to the height of  full twenty-five hundred feet [about fifteen hundred really: Mr. L. was mistaken], it is nearly perpendicular; and midway up its front stands an isolated rock, looming against the sky, which is of a circular form, and resembles the principal turret of a stupendous castle. (Chimney Rock)

The entire mountain is composed of granite, and a large proportion of the bluff in question positively hangs over the abyss beneath, and is as smooth as it could possibly be made by the rains of uncounted centuries. Over one portion of this superb cliff, falling far down into some undiscovered, and apparently unattainable pool, is a stream of water, which seems to be the offspring of the clouds; and in a neighboring brook, near the base of this precipice, are three shooting waterfalls, at the foot of which, formed out of solid stone, are three holes, which are about ten feet in diameter, and measure from forty to fifty feet in depth.

Postcard image of the Bottomless Pools from the 1940’s

But, leaving these remarkable features out of the question, the mountain scenery in this vicinity is as beautiful and fantastic as any I have witnessed among the Alleghanies. At a farm-house, near the Gap, where I spent the night, I met an English gentleman and tourist, and he informed me that, though he had crossed the Alps in a number of places, yet he had never seen any mountain scenery which he thought as beautiful as that of the Hickory-Nut Gap. My best view of the gorge was from the eastward, and just as the sun, with a magnificent retinue of clouds, was sinking directly in the hollow of the hills; and, as I gazed upon the prospect, it seemed to me, as was in reality the case, that I stood at the very threshold of an almost boundless wilderness of mountains.” 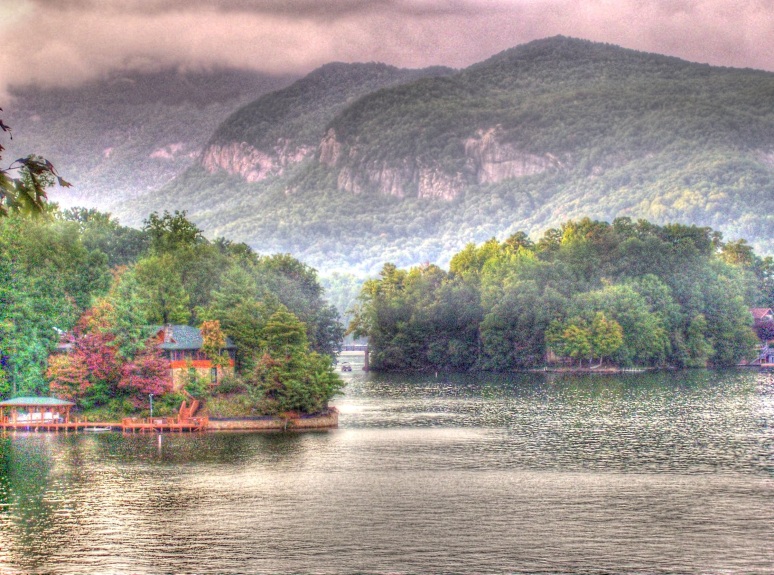 I couldn’t have said it better!

The last account is taken from The Asheville Spectator of May, 1858. This one is very spiritual in nature, with obvious references to the power of The Almighty

“On the other hand, when we view the grand, towering, bare rocks, of the Hickory-Nut Gap, displayed in all the majesty and greatness of Jehovah, one feels his insignificance, and trembles with awe at the typification of the grandeur and terror which is thrown around the ideal we have of the Creator in his wrath. He has no true appreciation of the grand and the sublime who will not, as he looks on those great high rocks, feel the intensity of his insignificance, and shrink within himself, gazing upon these marvellous works of sublime and terrible power, as displaying the supreme majesty of the All-wise, All-powerful Creator. Here the savage himself would pause, wonder, fear, and tremble; and not even the vilest of sinners, in his, wild, profanity and reckless infidelity, can pass such a scene, and not feel for a moment a dread of that awful unknown future. When in such a scene as this, I like to pause and lose myself in thought, not a word uttered, not a sound to be heard, except the wild dashing of the turbulent water of the crystal streams, which seem, even in their boisterousness, to sing a song of repose in the soft cadences of nature’s own music. To be in such a place, to witness such a scene, is worth a lifetime of toil and care.

The Rocky Broad River near Chimney Rock Village in Autumn