Every home in the mountains has this three dimentional topographical map hanging somewhere on the wall. It’s plastic, and has all the roads, town names, rivers, lakes, and contour lines to indicate height of the mountains. They are wonderful for getting a feel of where everything is, and where the highest peaks can be found. They allow the blind to “see” what the entire range “looks” like.

The photo above offers a slightly different approach. By viewing the map from the side with the light source in the distance, suddenly you can get a really good idea of how the mountains of North Carolina really might look if you were about fifty miles up, looking due west into the setting sun. That’s the South/North Carolina state line on the far left side, and Linville Gorge on the far right side. At the upper right corner is a barely visible yellow spot, which is Knoxville, Tennessee. The yellow area in the very center with three black dots is Asheville, which is the highest major city in elevation east of Denver, Colorado, and the two black dots toward the left side are over Hendersonville, the fastest growing area in the mountains. The distant peaks in the upper left make up the Great Smoky Mountains National Park, and the largest range of mountains toward the lower right side is the Black Mountain Range, with Mt. Mitchell being the highest peak of all. There’s a yellow push pin marking the location of my house on the Rutherford/McDowell County line. I live on the very eastern side of the mountains. Drive five miles to the east, and you’re back in the North Carolina Piedmont area.

The scale of the height of the mountains for these kind of maps is multiplied by three to exaggerate the three dimentionality for the human eye. If Mt. Mitchell were really as tall as it is shown on this map, it would be almost 21,000 feet high, taller than Mt. McKinley in Alaska, and only 5,000 feet shorter than Mt. Everest. Because the Appalachians is the oldest mountain range on Earth, it has been eroded for billions of years into the relatively smooth range that it is today. There are no natural lakes anywhere on this map. Any lake in the mountains today was man-made. Most of the valley areas visible in this view were made by rivers and glaciers from the last ice age, and the solid material they have carried has ended up in the Gulf of Mexico and the Atlantic Ocean. The rough, undulating terrain visible here was sculpted by rain and ice over millions of years. Six hundred million years ago, these mountains were taller than the Himalayas are today.

To get the full effect, click on the photo to see the larger version.

Below is a view of The Black Mountain Range with Mt. Michell being the tallest peak on the far left side of the most far away blue ridge in the image. The photo was made looking almost due west from the very eastern edge of the mountains, about ten miles north of me. 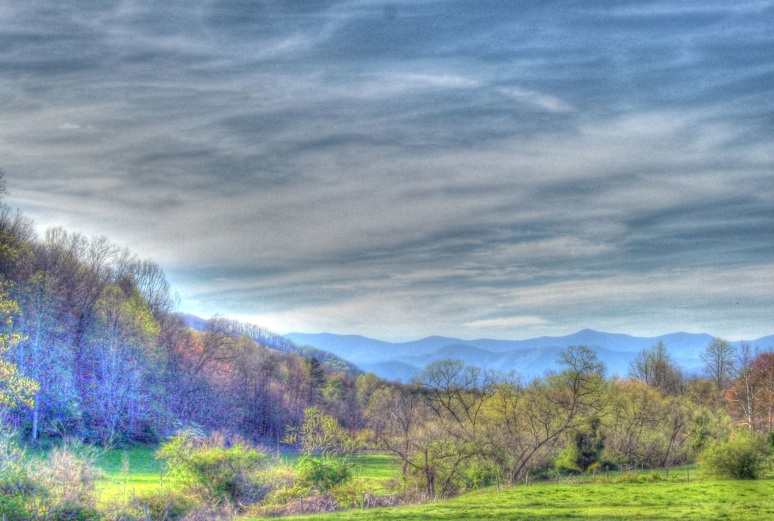