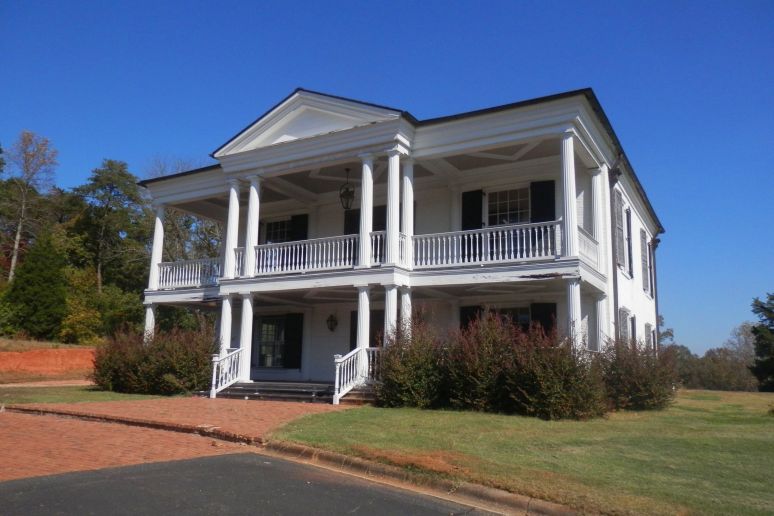 In 1764, Col. John McDowell was granted 2,000 acres around Cleghorn Creek by the Royal Governor. This land is now part of Rutherford County, North Carolina, and is a few miles north of the South Carolina border. Sometime after 1820, the land was acquired by a Scot planter, Thomas McEntire, who was born in Ayrshire, Scotland, in 1782. In 1837, he built his two story manor house on a hilltop overlooking his fields. It was made of brick with foot thick walls throughout and two chimneys. A large sweeping exterior staircase led to the second floor, which was considered the main floor. Oral history says that the house was designed by David Paton, who was the supervising architect for the State Capitol in Raleigh. The plantation grew cotton, tobacco, and corn, and was the home to many slaves. It survived the Civil War, when it was used as a Union headquarters near the end of the war. 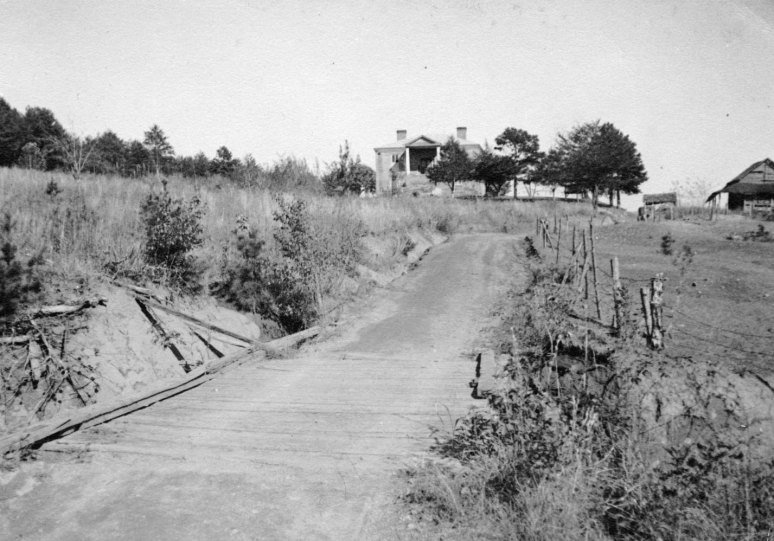 In the late 19th century, it was purchased by the Washburn family, who lived there until the mid 20th century. Above is the earliest known photograph of the house. 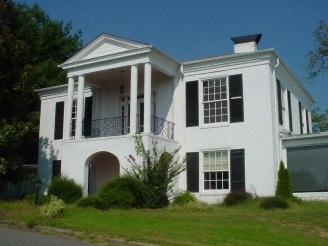 In 1940, the house was remodeled, and the original staircase that led to the main hall on the second floor was removed, and the lower floor entrance became the main entrance. In 1970, the plantation was purchased by a development company, and a championship golf course surrounded the house, along with many private homes and a country club. 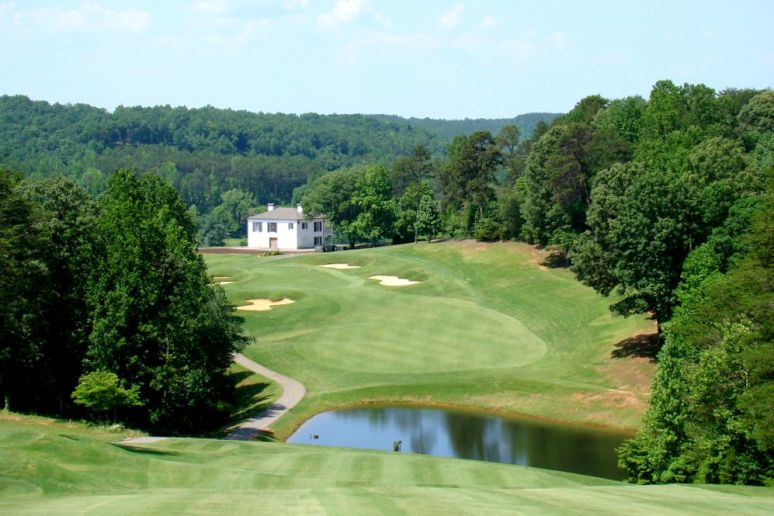 In the 1990’s, the house, which was being used as the clubhouse for the golf course, was remodeled again to become a first class restaurant. 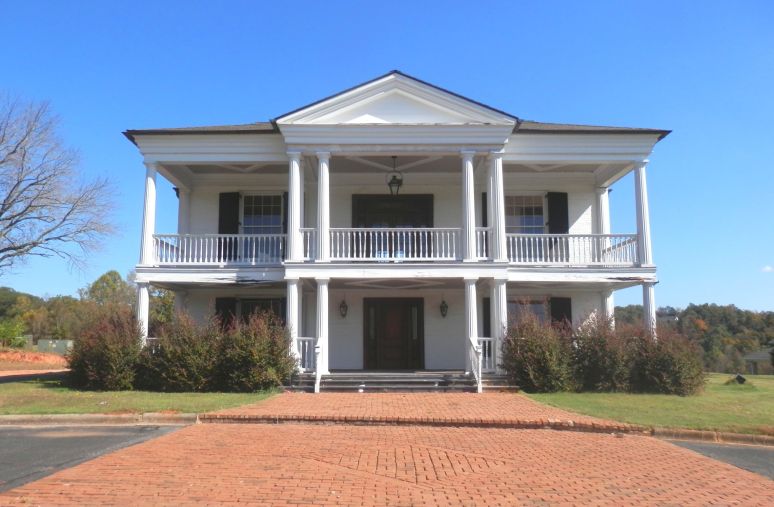 Two large covered porches were added to the front facade, and a new mohagany front entrance was added with original gaslights. (below) 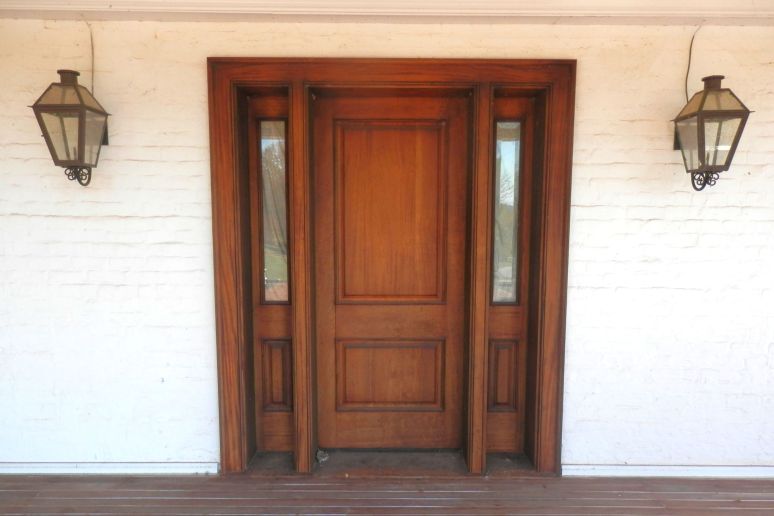 The restaurant was not successful, and was closed in the mid 2000’s. With the financial collapse of 2008, the entire developement suffered, and went into bankruptcy in 2011. During that time, The Historical Association of Rutherford County saw that the historically significant manor house was threatened, and a grant of $225,000 was made with the intent of restoring and protecting the house. 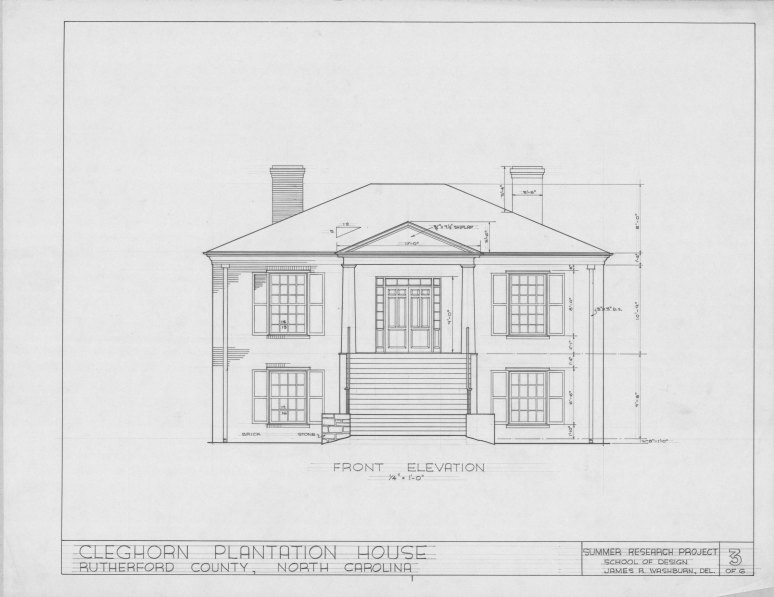 Detailed architectural drawings were made of the house using historical documents and accounts. 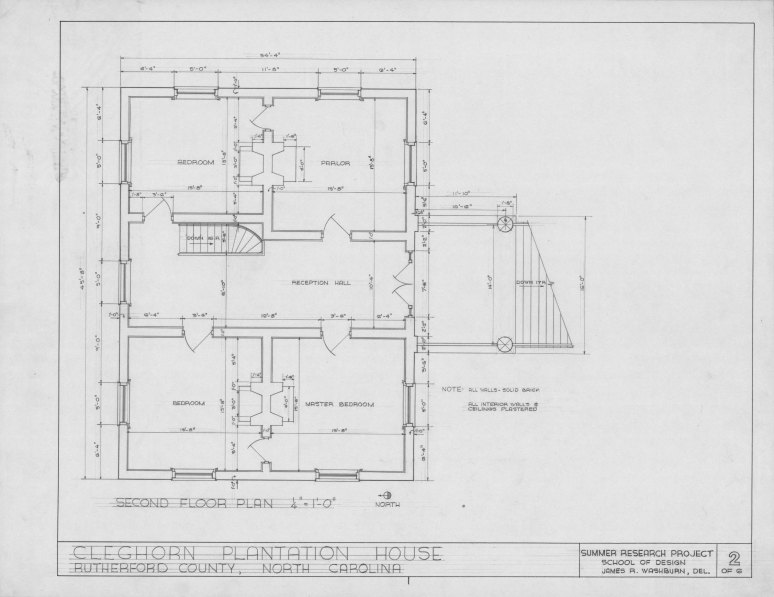 Shortly after work began to restore the mansion, legal complications developed with the entire property, and restoration was halted before much work could be done. Below are photographs of the first floor showing the current state of the house’s interior. 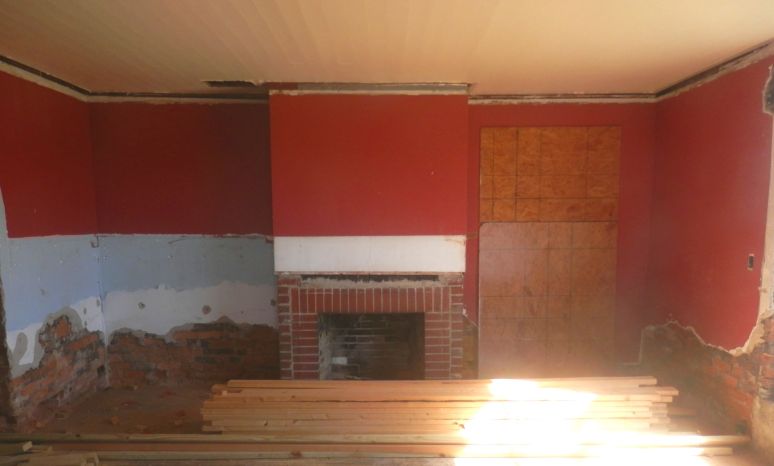 This is the parlour on the right side of the first floor. The fireplace is original. Below is the archway leading to the main hall. 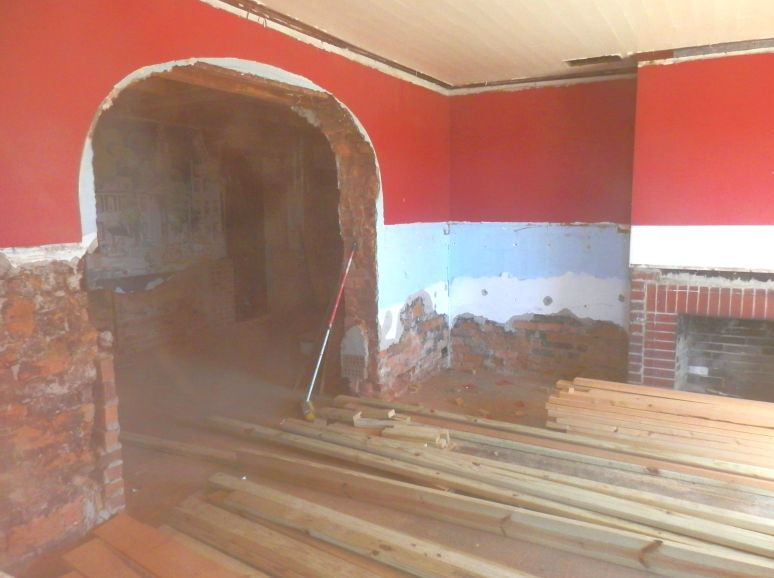 Across the hall through this archway is a bedroom (below). 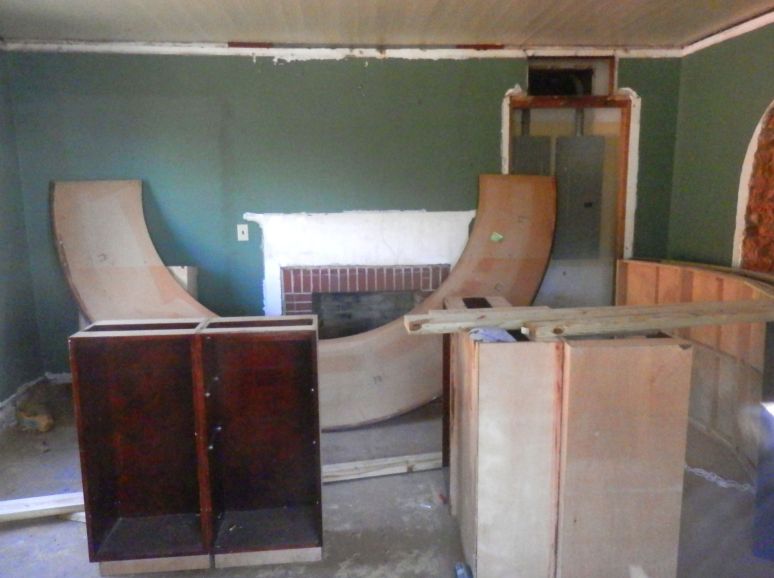 Looking through the bedroom into the hallway, you can see the spiraling staircase to the second floor, and also appreciate the thickness of the brick walls. (below) 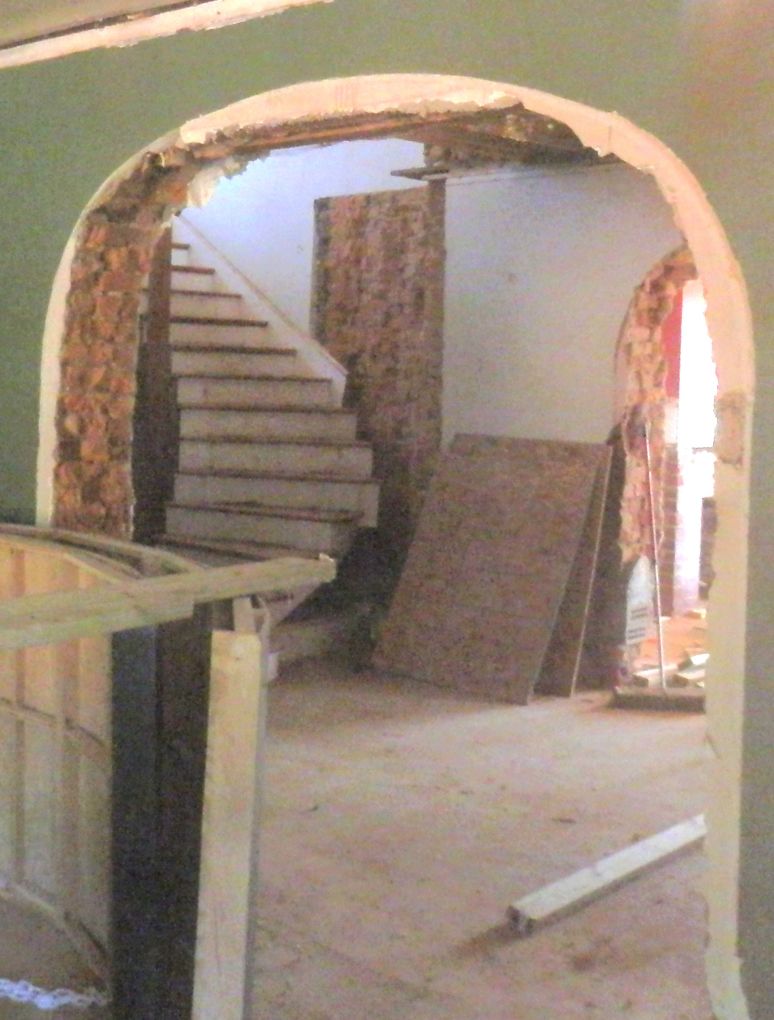 The house is not being maintained for weather damage, and the exterior woodwork is being allowed to rot. (below) 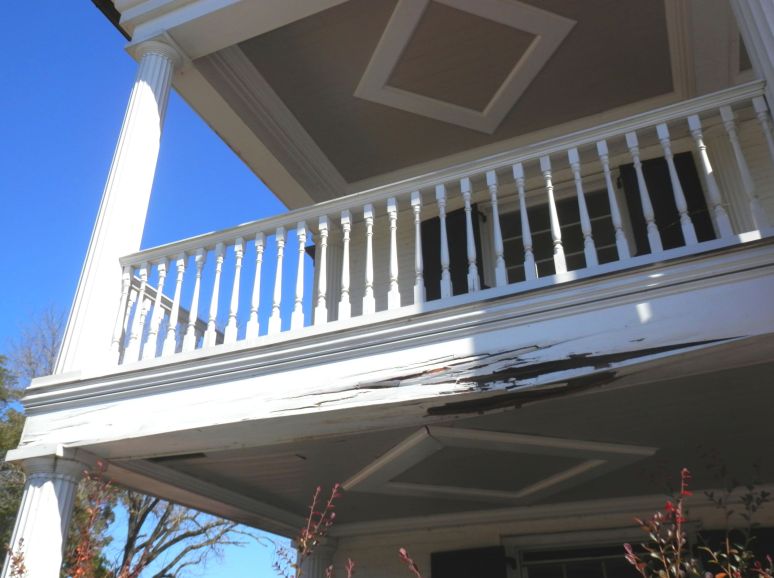 A number of original handmade window panes have been broken out, and rain is getting inside the structure (below). 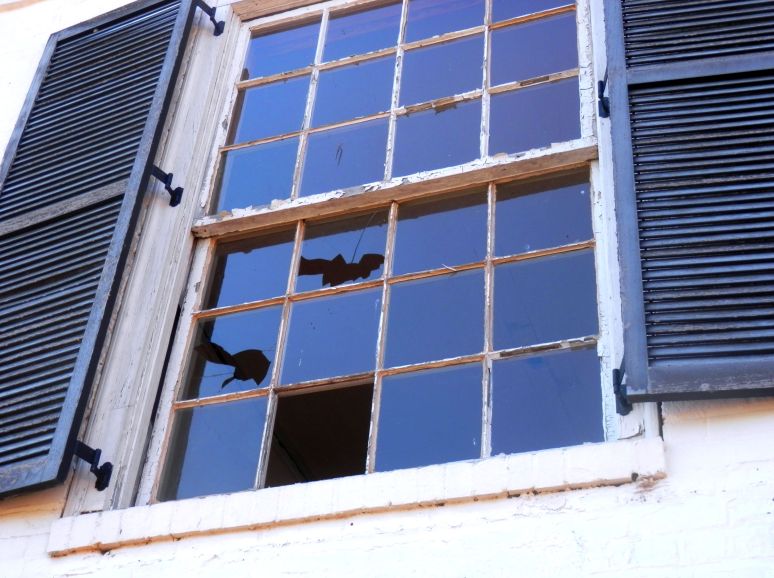 This old dowager has withstood 175 years of war, weather, and development, and it would be a real shame if she were allowed to deteriorate before our eyes. 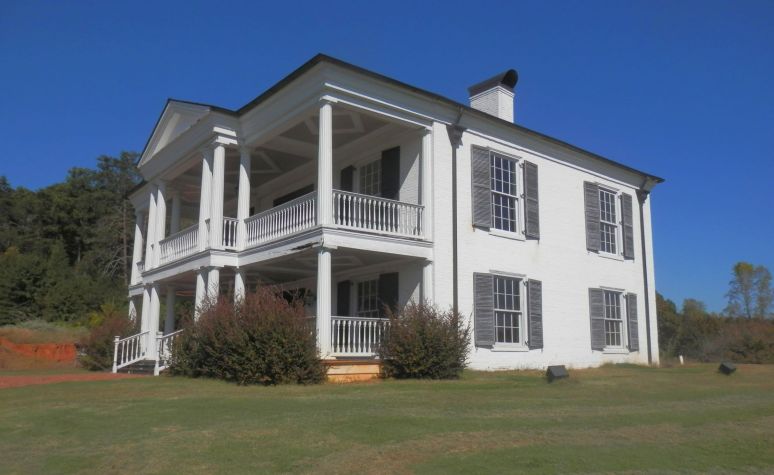 I intend to become involved in her plight. The most pressing issue is the broken windows, and I will find a way to at least get those covered and sealed. This manor house is most likely very similar to what the Tara of Gone With the Wind fame would have resembled. If I have anything to do with it, she will be restored, and opened as the historic house that she always was.