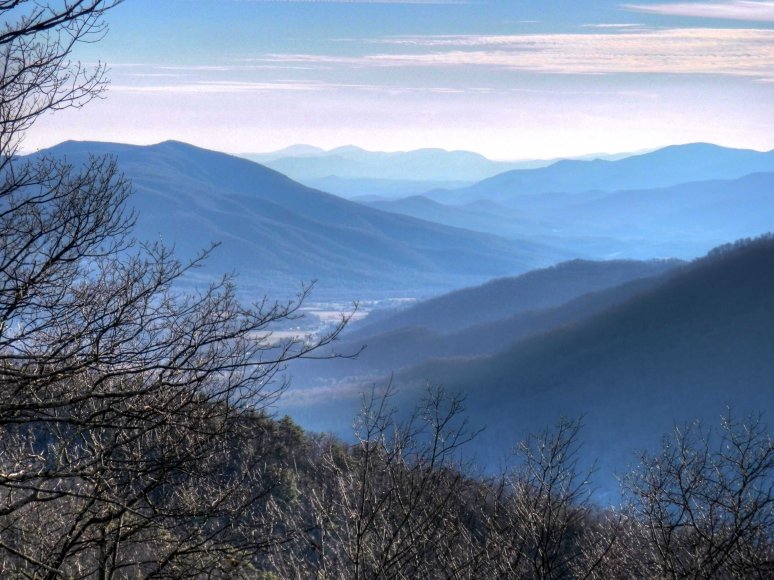 Driving along the forest road on the western rim of Linville Gorge, you are greeted with this panoramic vista of the mountains toward the southwest. The most distant 4,000 foot peaks are around Lake Lure forty miles away. This unpaved roadway varies between 3,300 and 3,900 feet as you head south at the crest of the ridge. 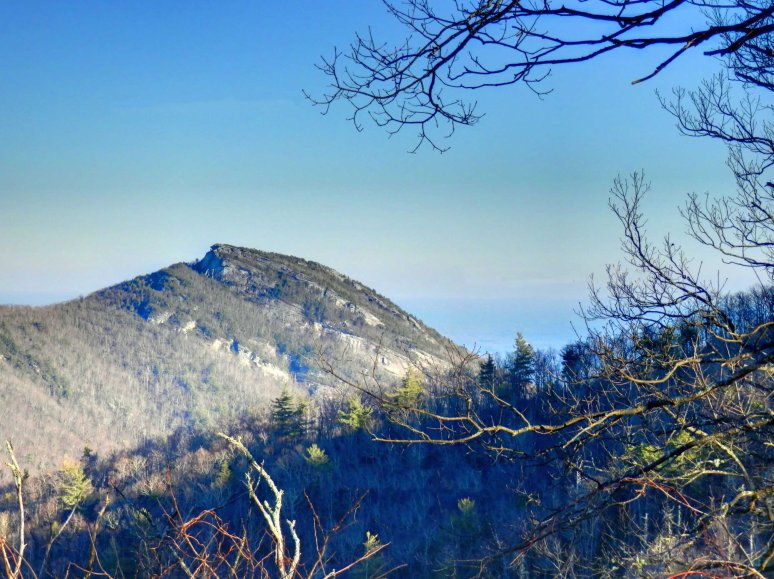 Looking east from the same spot (above), you see 4,100 foot Hawksbill Mountain, with the North Carolina Piedmont visible in the far distance. A little further south, you park, and hike to what many call is the most spectacular spot in all of the Appalachian Mountains……..

This is Wiseman’s Point, and from here you can see the gorge in all its glory. Above, you see the eastern rim, with the Linville River cascading 1,500 feet below toward Lake James of the Catawba River system. Turning back to the north, you are awestruck by the sheer size and ruggedness of the rocks along the west rim………….

The Sun is almost behind the mountains, but the light off of the eastern ridge is dramatic in contrast to the half-billion year old rocks beneath your feet. The drop from here is 1,500 feet straight down, so you are careful not to venture out to far. The gorge has been carved by water and ice for 300 million years. Multiply that many winters with water freezing between the rock layers and displacing huge sheets of stone toward the river below, and you can see how nature has worked her magic on the steep cliffs. Table Rock, below, just across the gorge from Wiseman’s Point clearly shows the effects of this relentless erosion.

The setting sun gives the mountain a golden glow. Hiking trains allow you to climb to the top of both Hawksbill and Table Rock Mountains. The tree in this photo is called the Table Mountain Pine, and is native to these craggy walls and high ledges. Turning back to the south, you see the southern terminus of the gorge, and the South Mountain range on the distant horizon. Linville Gorge is called the Grand Canyon of the East for obvious reasons. 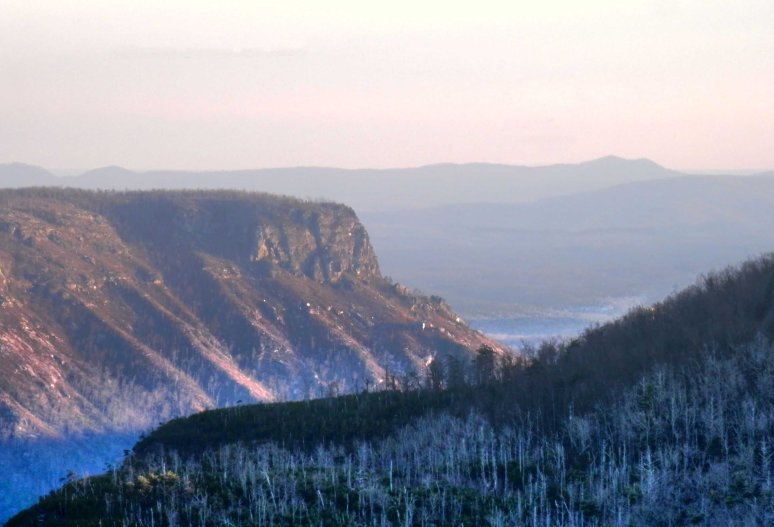 The rugged mountain on the east rim is called Short Off because of its flat top. Turning to your right, you are given this remarkable view of the lower West Rim. The forest road continues south along the crest of this mountain for seven more mile until it reaches Lake James. A four-wheel drive vehicle is strongly suggested if you plan to make this trek, and beware of the Black Bears that inhabit this part of the Linville Wilderness.

With the sun slowly setting, it’s time to head back onto the forest road and drive back north. You don’t want to be out here in the dark without a fire burning if you can help it. Looking back to the west, the colors of the sunset stop you again.

On the distant horizon is Mount Mitchell and the Black Mountain range.

No matter the season, you are always in store for a memorable visit when you encounter magnificent Linville Gorge

6 thoughts on “Winter Sunset From The Linville Gorge West Rim”