Last October, I posted an article about the historic Cleghorn Plantation Manor House (See the October, 2012 Archives). I was concerned that the structure was being allowed to deteriorate, and expressed a desire to become involved in a restoration of the property. Over the last six months, the current owners of the bankrupt development where the house is located have at least closed all of the shutters around the house, keeping most of the weather out. I thank them for that. In spite of the neglect, the view of the house from down the hill is still quite impressive (below). 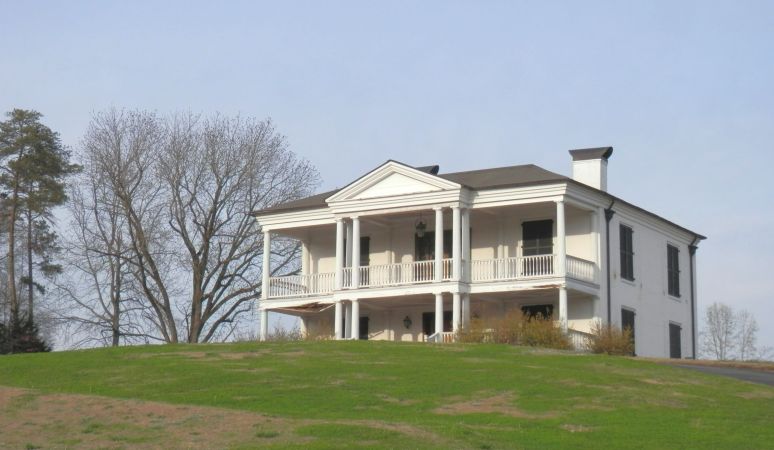 I contacted Robin Lattimore, President of the Rutherford County Historic Society, and below is a portion of his response. It was very gracious of Robin to share his history of the property.

Like you, I have an extensive archive of material from Cleghorn, and have written about that property many times. My family was among the first “members” to join the Cleghorn Country Club in 1971. I have spent many wonderful hours in and around the mansion house.
I was also on site in 2005 when Mrs. Bortner (previous owner) told me that she was not interested in keeping the house the way it was and proceeded to tear out all of the interiors. I was then on site when the next owner (representative) Jimmy McDonald claimed that a full-scale restoration would be conducted. I spent many months producing a historical report- “Belle of the Backcountry: The Story of Cleghorn Plantation,” that was intended to be published when the restoration was complete. Needless to say – I was never paid for my time or work with the developers even though they promised to reward me financially.
As for the future of the property – you have already identified the primary obstacle; no one is interested in getting involved in a property that is tied up in bankruptcy court. The greatest problem stems from the fact that the house is surrounded by commercial / residential development. Most all restoration efforts would require that the property be used in some commercial manner, and NO ONE is willing to risk money on that property. It has gone through successive bankruptcies since 1979.
On a personal note, I’m so distressed that a previous owner allowed an architect to change the facade and add the faux antebellum veranda. Luckily, the rot that can be seen on the wood dates only to 2007. If I had my way the entire front veranda would be pulled away and replaced with the same type of portico that was constructed by David Paton.

Thank you so much for writing. Just yesterday I heard from Robin Lattimore, who is the head historian for Rutherford County. He, too, would like to see something done, but he feels that the legal problems of the bankruptcy restrict outside parties from taking any action. I think there are precedents across the state where developers have been forced to protect historic properties from destruction, even when the company is having financial problems. Also, if we could have the house added to the National Register of Historic Places, many other laws would kick in, even if the management company refused to participate. We have options here.

As a property owner, what information have you been given about the legal situation of Cleghorn Plantation? Do you have any names that might be of assistance to me in learning more about the property’s financial future? It was told to me by the last superintendent at the golf course that $250,000 had been appropriated to restore the house, and it looks like a good deal of work had been done inside before everything was frozen. I wonder from where that money would have come?

My first goal is to get permission from someone to make the windows weather tight so that further water damage can be minimized. The roof looks sound, and the rot on the 2007 portico is not really a concern. Most likely, that will be removed anyway. If nothing else, that double floor portico and porch is protecting the front of the house. I don’t think those three foot thick walls are going anywhere, but my biggest concern is with fire, arson or otherwise. In the past, these old houses have mysteriously burned down, releasing the property owners from any obligation to restore these treasures. Money causes people to do strange things.

I envision a restored plantation house, furnished in period furniture and decorations, and opened for scheduled tours, much like the homes along the James River near Williamsburg. Staff would dress in period clothes, and guides would relive the early 19th century plantation experience. A trust would be created to keep the house going, and entry fees would help to offset those costs. Much of the staff would be made up of volunteers. As a major historical attraction in the North Carolina Foothills, there would be money available from many other sources. Perhaps WUNC public broadcasting could become involved in the effort to save the house. So much can be done, but we just need to start the ball rolling.

Thank you again for your concern, and I hope to hear from you again very soon. We are so lucky to live in such a beautiful place, and it would be a crime if our history were allowed to disappear.
Sincerely, Vann Helms

I also now have a contact name of someone who worked at the golf couse for many years, and his knowledge will be of great help when the time comes to make the next step in this effort.

19 thoughts on “Followup to the October, 2012, Cleghorn Plantation House Post”